(Left to right) Zawahir and Wong jointly unveil the sign to mark the handover of the water treatment system, under the gaze of village chief Gubil Padat.

SIMUNJAN (December 4): The drinking water supply problem is now a thing of the past for the villagers of two longhouses in Kampung Benat Hulu here, following the completion of a corporate social responsibility (CSR) project undertaken by Etiqa.

Entirely funded by Etiqa and carried out in cooperation with Islamic Aid Malaysia (IAM), this project covered the reconstruction and improvement of the rainwater harvesting systems of these two longhouses.

The mechanism is simple: the rainwater flowing over the roofs is directed through gutters into a set of aluminum reserve tanks, from where it would pass through a large-scale membrane and UV filters before being channeled in the form of clean water to each domestic unit in longhouses.

The pumps used are generated by electricity.

It is known that the villagers of the longhouses of Kampung Benat Hulu have relied on rainwater for their daily use for the past 30 years. However, their previous storage method was not hygienic; thus, they should always buy bottled water for drinking and cooking.

Etiqa’s CSR project started in November 2019, but had suffered some delays due to the Covid-19 pandemic. 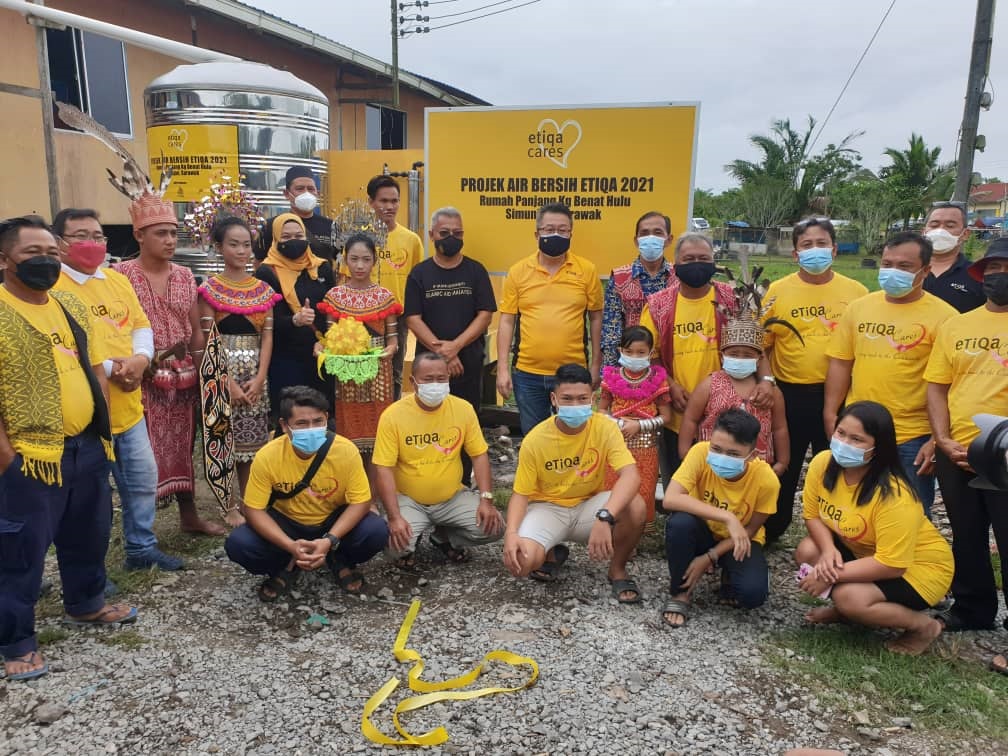 Wong, flanked by Zawahir (standing in front, seventh from left) and village chief Gubil Padat, joins the Etiqa and IAM teams in a group photo with the villagers after the ceremony.

However, after the lockdown was lifted, work resumed and the system was fully ready on Friday.

“We hope this project will reduce the risks associated with the consumption of untreated water.

“We also hope that the villagers will cooperate with each other to maintain this system.

“This project is in line with our CSR slogan, ‘Etiqa Cares’, as well as our vision to make the world a better place by improving the standard of living and the socio-economy of communities in need,” said Etiqa Sarawak. Regional Director Wong Chee Tung in his speech before officially handing over the project to the villagers of the longhouse in a simple ceremony today.

Meanwhile, IAM President Zawahir Abdullah, who was also present, said that as a non-governmental organization (NGO), he took on the role of facilitator for individuals and legal entities who wished undertake social and humanitarian activities aimed at benefiting those in need. .

“In this regard, we are honored to have been able to work with the Etiqa group on this important project, which I consider unique in that it involved the villagers of the longhouse in the ‘gotong-royong’ spirit ( work group).

“I am also touched by the solidarity and cooperation among these villagers, and I sincerely wish them all the best for the future,” Zawahir said.

Govt. contacts manufacturers and e-commerce companies to increase the availability of national flags

Forex, the flexibility of interest rates necessary for the development of the market: Atiur Rahman