flux/download this segment as an MP3 file

As winter sets in across the northern hemisphere, people are finding creative ways to get outside and enjoy nature. For journalist and environmental photographer Erik Hoffner, winter is the time for ice skating, a passion that has given birth to an unusual art, in the making for 20 years.

CURWOOD: As winter sets in for the northern hemisphere, people are finding creative ways to get outside and enjoy nature. For environmental journalist and photographer Erik Hoffner, winter is a time for ice skating, a passion that has spawned an unusual art.

HOFFNER: The first house I rented after moving to New England two decades ago was on a lake. I love ice skating and lucked out when a cold, dry December created a perfect scenario for skating right outside my door.

HOFFNER: Most mornings I would put on skates and slide down that lake until my legs were shaking and hurting. The hissing and scraping of blades on the ice was often the only sound against the deep, cold stillness of the sleeping landscape. The ice that first year was so clear I could see fish swimming below. In early winter, as the ice formed, I could even hear its creaks, groans, and pops through the floor of my house. 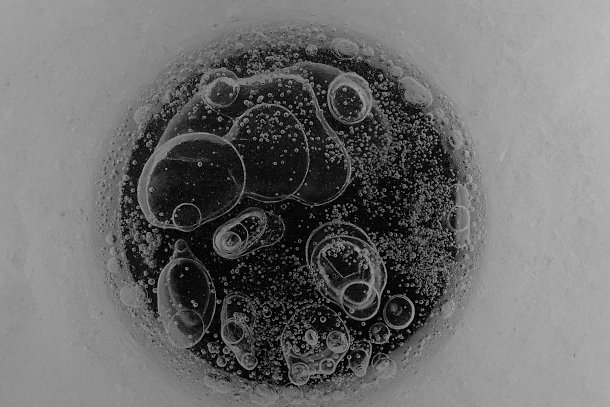 HOFFNER: Then the ice fishermen drilled perfectly round holes in the lake. And overnight, tiny bubbles seeping from the sediment below were caught in the thickening water inside the holes as centimeters of new ice formed. The bubbles stretched as the water refreezed, creating streaks that radiated outward from the center, much like the lines that radiate from the iris of an eye. These holes seemed to become the lake’s own eyes, gazing at and reflecting the starry sky. The formations were all different, like snowflakes. In the morning light, they might look like stars, cells, or galaxies. Now, every year at the start of winter, I put on my skates on a kind of scavenger hunt for holes and take black and white photos of them. In 20 years, I have built up a huge collection of these visions of ice. I don’t know which is more fun, taking photos or putting on my skates to fly over the frozen water on those peaceful winter mornings. Some years, however, snow early, before the ice reaches a safe thickness, making skating impossible. And the photos I take on this choppy gray canvas are less captivating than when refrozen holes are framed by this smooth black ice that looks like deep space. Last winter started out cold and good safe ice set in early but then the weather warmed up for a long time until January and what I saw inside the fishing holes m surprised. 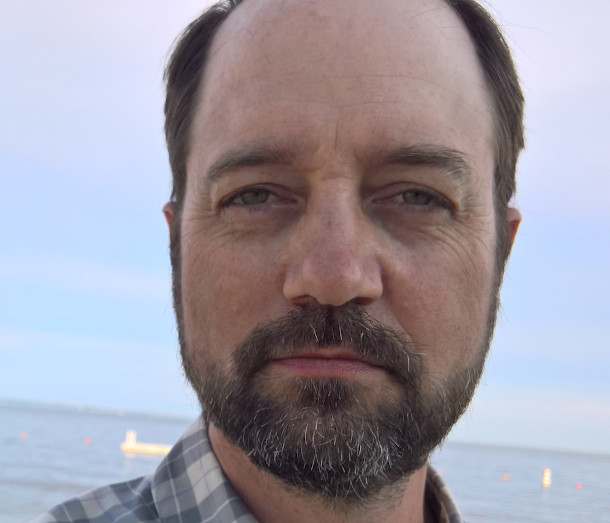 Erik Hoffner is a writer and photographer. (Photo courtesy of Erik Hoffner)

Instead of building 2 or 3 inches of new ice in each hole overnight, there was often just a skin on the surface, so thin you could run a finger through it. And the tiny bubbles trapped under that thin layer of ice coalesced with others to create large, semi-frozen bubbles that oozed and sank together. They looked completely different, not so much like eyes or stars but more like distorted faces and strange animals. It was like seeing the face of climate change. It is too early to say if it will still be too hot this year. But there is already safe ice on my town’s lakes, so I’ve gotten the cameras and skates out a few times and can’t wait to experience the wonders this winter will bring.

CURWOOD: This is journalist and photographer Eric Hoffner. His work was recently acquired for the permanent collection of the Bates Museum of Art in Maine. For links to his photographs, visit the Living on Earth website loe.org.

Living on Earth wants to hear from you!

Newsletter/>Living on Earth offers weekly delivery of the show summary to your mailbox. Sign up for our newsletter today!

sailors for the sea: Be the change you want to see.

Innovating to make the world a better and more sustainable place to live. Listen to the 9 billion race

The Grantham Foundation for Environmental Protection: Committed to protecting and improving the health of the global environment.

Energy Foundation: To serve the public interest by helping to build a strong and clean energy economy.

To contribute to Living on Earth and receive, as a gift for you, an archival copy of one of Mark Seth Lender’s works extraordinary animal photographs. Follow the link to view Mark’s current photography collection.